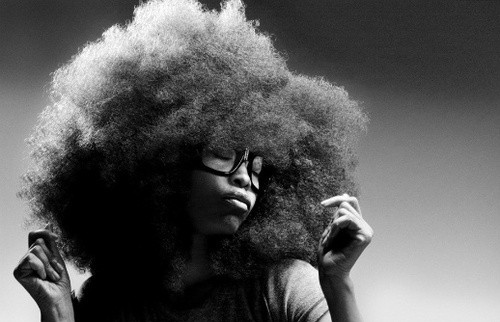 Today I came across the video above featuring Erykah Badu…Erykah Badu is one of my favorite artists not just for her music but also for the way she portrays herself. For as long as I can remember she’s embodied this hip-hop hippie. She has soul in this trippy way that is fresh and new.

With a vibe like her’s it is only right that her clothes reflect it. Erykah Badu is one of my style inspirations because she wears whatever she wants. I feel like even if you don’t agree with her style, you can respect it because it’s organic. It’s not gimmicky or along the line of trends it’s truly hers. For instance she’s probably the first person I remember wearing a turban for non-religious reasons. Now turbans are a big trend. She’s one of the only people I’ve ever seen pull off a top hat. I’m pretty sure the list goes 1. Abe Lincoln 2. Erykah Badu…

Anywho, another reason I appreciate Erykah Badu is for her hair. By growing up in the DMV I’ve learned how few African-American people value their natural hair. Prince George’s County like a lot of other majority black areas embraces weave culture to the fullest extent. Erykah Badu has always broken this norm. While she has had straighten hair she is much more well known for her afro and braids. As a kid, who used to steal her CDs from my dad’s collection, I just thought her hair looked cool. As a young adult I respect it because natural hair is beautiful and the more celebrities that embrace it, the more everyone else can come to realize it too.

Overall I love Erykah Badu and I appreciate her influence on my life. From music to fashion to hair even to spirituality Erykah’s had some role.

My favorite Erykah Badu song, “Love Of My Life”

12 May This entry was written by uyellelle and published on May 12, 2012 at 9:46 pm. It’s filed under Fashion, Music and tagged African American, Alexis, Common, Erykah Badu, hair, hip-hop, R&B. Bookmark the permalink. Follow any comments here with the RSS feed for this post.