Wearing any type of accessory, in my mind, is a most. From a bracelet to sunglasses, or even just your smile, that extra helps to make you, you. But what if you could add an accessory that not only represents you, but also inspires you to strive to be the best? I recently came across a retweet from @CarpeDreamNYC on my twitter. I have to same Carpe Dream is one of the “dopest” bracelets I have seen that and it has its own meaning behind each design.

I got in contact with the creator Luis Banks from New York who was able to inform me about the inspiration of creating Carpe Dream. Less than 7 months since Banks created his first design, he had formed a bracelet for his own satisfaction. Putting beads and 2 wings on each side, Banks said it seemed like it was flying. In a way it did because after major positive feedback, Banks’ own satisfaction became the satisfaction for others.

Formulating a plan combining a brand that “represented the idea of having a dream, having a vision, and actually making it happen,” plus represent Banks’ generation and idea of taking advantage of every opportunity; the Brand Carpe Dream was formed.

For those that don’t know Carpe Dream means, “Seize the Dream,” in Latin. Make sure to check Carpe Dream out because along with the motivation of chasing your dreams, each bracelet is unique because of its name such as, “Sky’s the Limit” or K.A.M.O. I know I will be getting “Sky’s the Limit: Eye of the Tiger.” Make sure to show your man, Luis Banks, some love :). 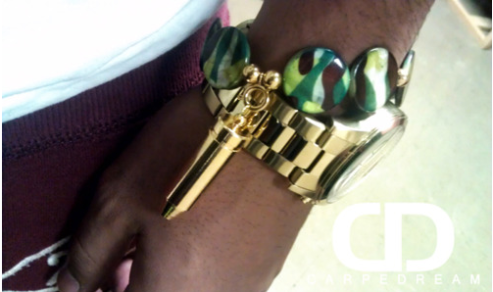 06 Apr This entry was written by shannonclash and published on April 6, 2012 at 11:41 am. It’s filed under Fashion and tagged Accessory, Carpe Dream, Fashion, Luis Banks, NYC, seethroughshann. Bookmark the permalink. Follow any comments here with the RSS feed for this post.

One thought on ““Seize the Dream”: Carpe Dream”